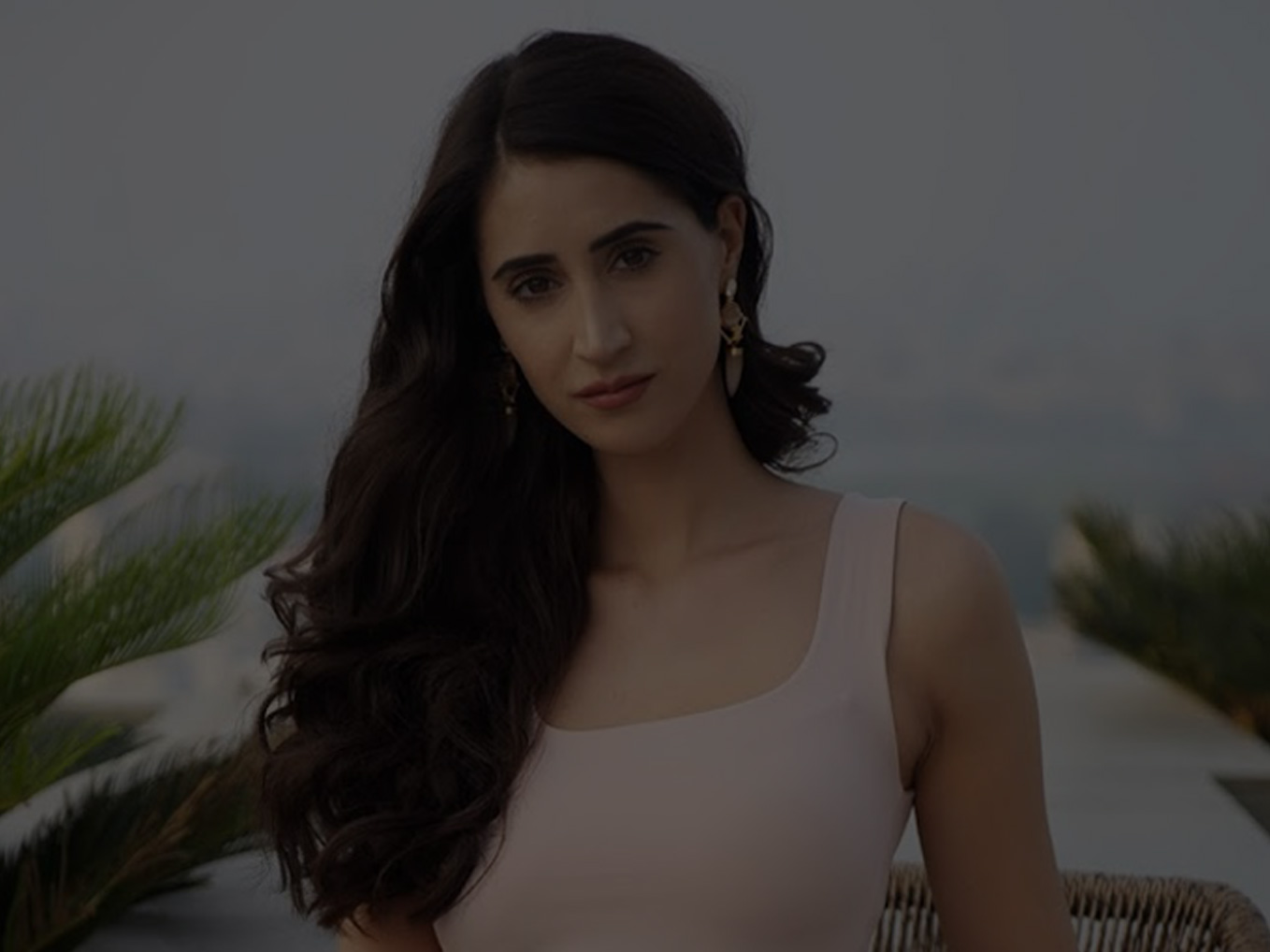 Eisha Acton is an Irish-Indian Sports Broadcaster from London. She works for a number of UK and International broadcasters as a Football Reporter and Sports Presenter.

Eisha became a prominent face of Indian Sports Broadcast as an ISL Football Reporter for Star Sports. The Indian Super League is the most watched non-cricketing league in Asia and the role involved travelling nationwide to attend matches and report pitchside for internationally broadcasted show ‘Football United Live’. More recently in Europe, Eisha has worked as a matchday Football Reporter on BT Sport Score and for Sony Sports all throughout the EURO2020 tournament. Football fans followed Eisha’s daily Euros reports as she travelled for games, reported live from stadium to studio, filmed post-match reports, produced fan stories and interviewed sports personalities/pundits and fans. Reporting live from Wembley at the EURO2020 final is a career highlight in Eisha’s ambitious journey into European Sports Broadcast. 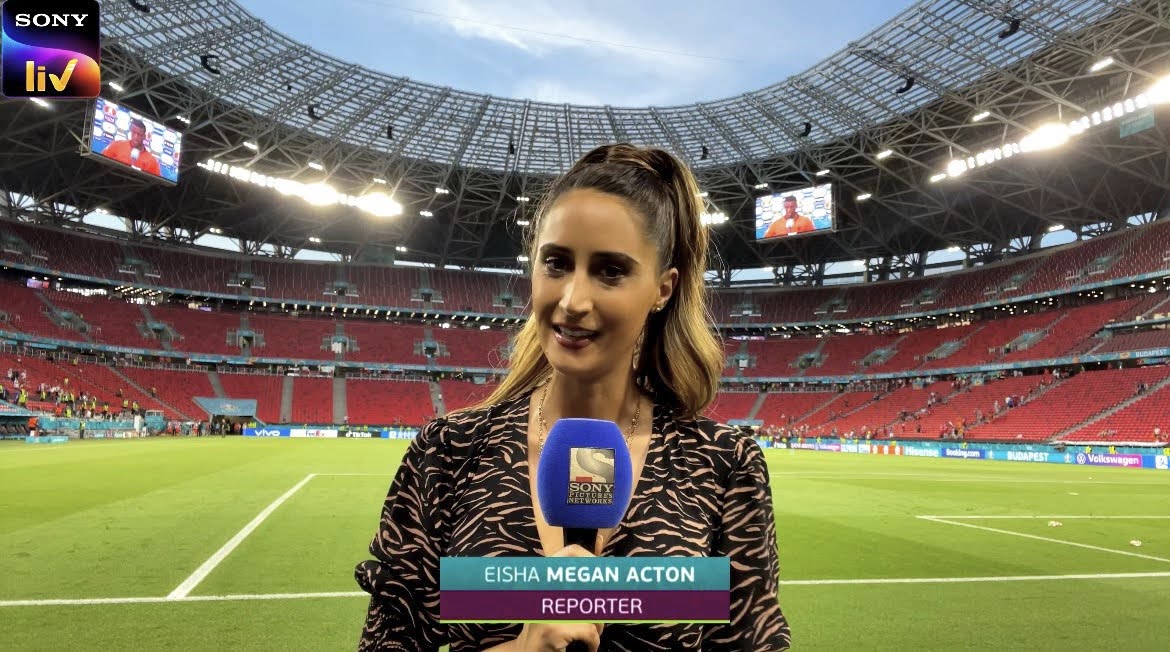 Eisha’s presenting experience at ESPN India and ESPNcricinfo has helped establish her as a leading Female Sports Anchor too. During her tenure at the channel, Eisha presented a number of studio based shows such as- ‘Free Kick’ for the FIFA world cup,‘The Social Dugout’ for the IPL, ‘Beyond the Boardroom’ and daily roundups for the U.S. Open and The Asian Games. The lead up to the Cricket World Cup in 2019 saw Eisha tour the UK with ESPNcricinfo for a series collaboration with VisitBritian. In addition to filming daily studio shows to report on sports tournaments, Eisha’s experience includes attending sporting events for interviews to travelling overseas for features and self-shot travel vlogs.

You will find Eisha currently appearing on live TV shows such as ‘Premier League Today’, featuring on the ‘Football Social Daily’ podcast and filming football-related features for BBC Sport. Reporting at the Formula E World Championship saw Eisha travel to Rome for round 4 and 5 of the Motorsport series. The role involved presenting for eight live shows (broadcast on Channel 4, CBS, Star Sports & more) 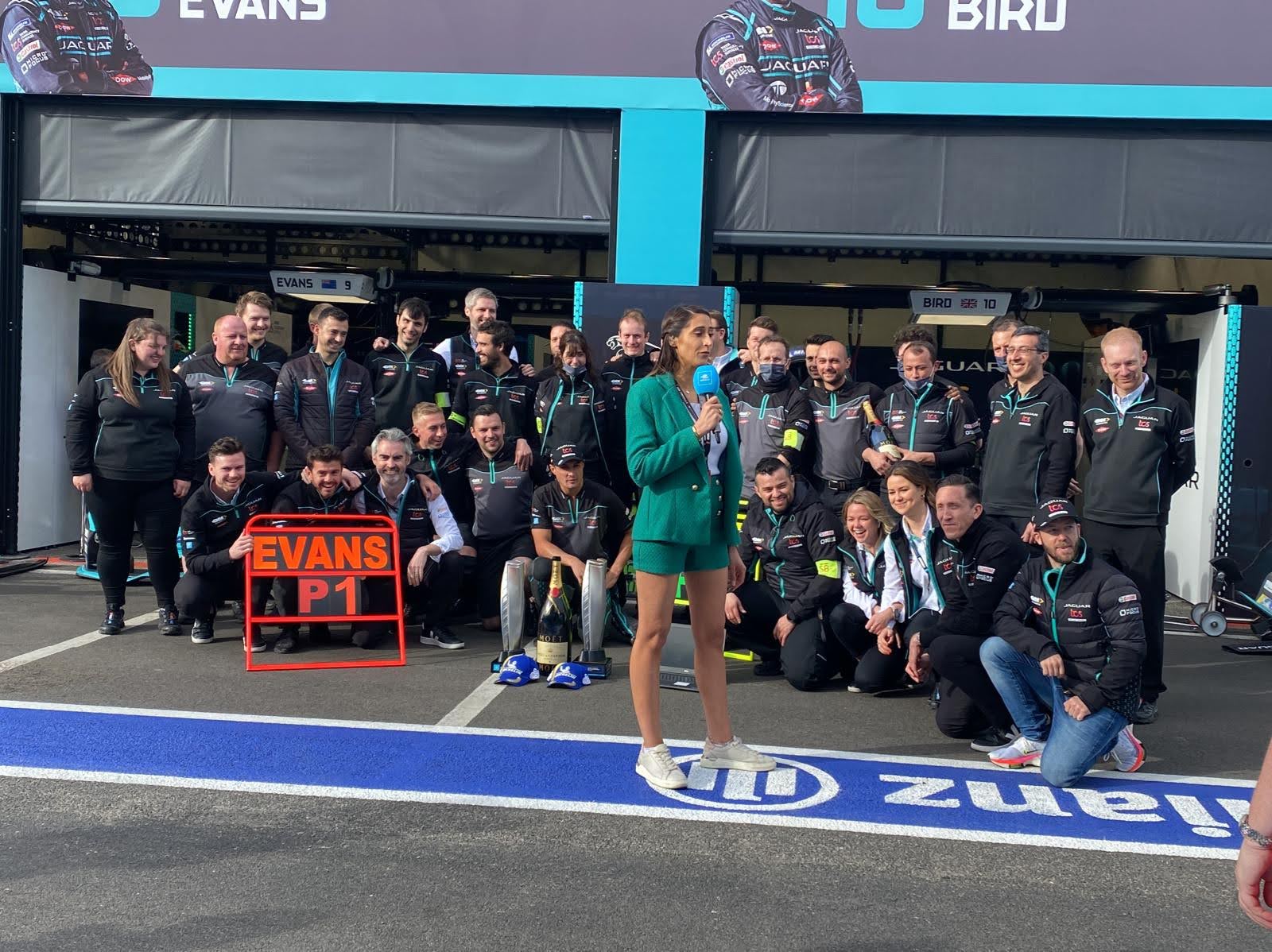 Eisha enjoys expressing herself creatively by curating weekly sports updates and interviewing sports personalities for her own YouTube Channel and Podcast- ‘The Football and Cricket Channel with Eisha Acton’.

As a personal project, creating ‘The South India Series’ involved planning and shooting documentaries all over India. 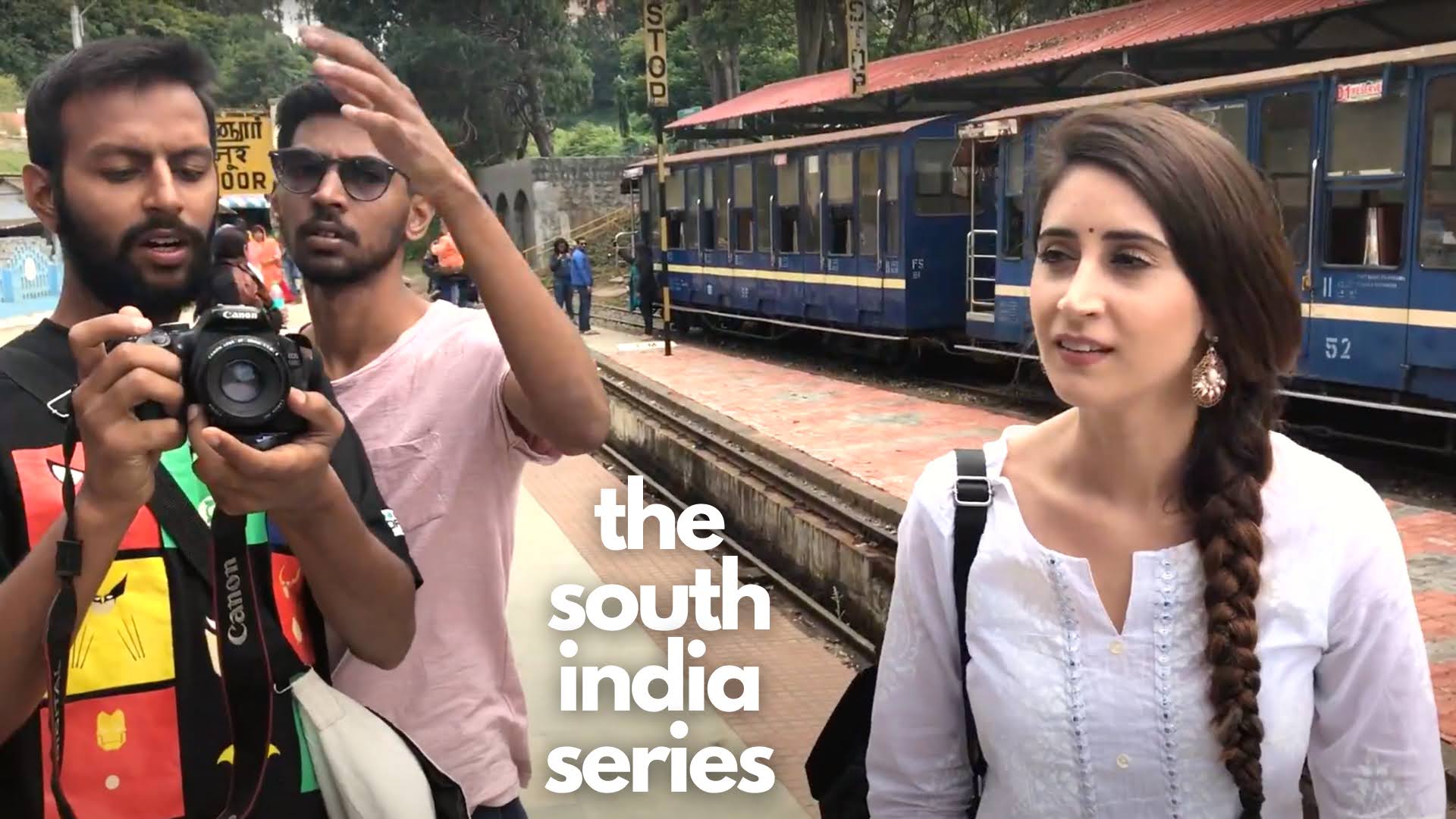 To further her passion for football, Eisha obtained her FA coaching and talent ID badges to work with youth teams within Hertfordshire. Following a year and a half at Stevenage Borough Juniors, she currently coaches football at Watford Football Club for their ‘Premier League Kicks’ programme. 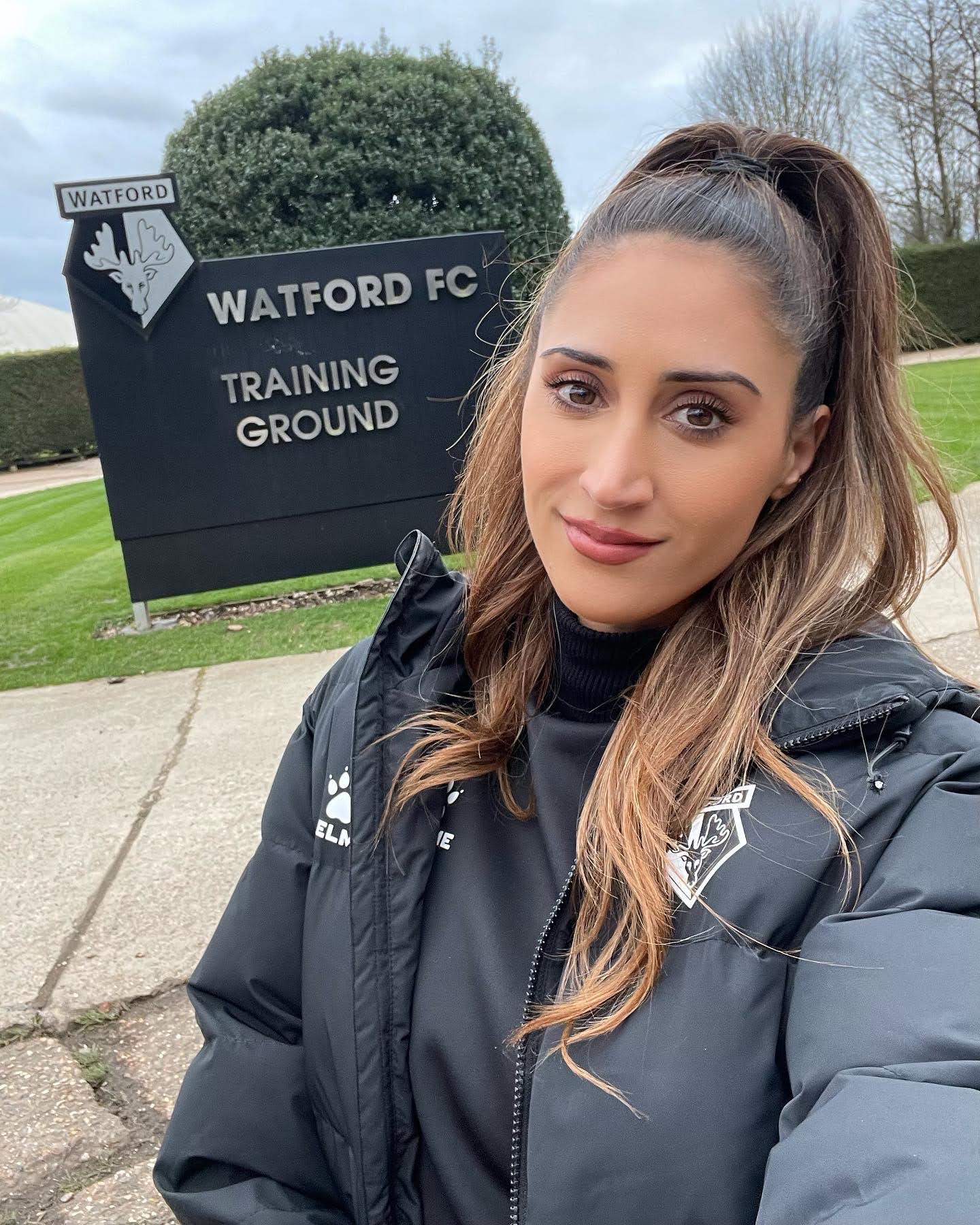 The Adidas Creators Premier League was the first ever semi-professional football league in India. Setting up a football team as a co-owner gave Eisha the opportunity to learn more about the commercial side of football. From scouting to attending player auctions, to recruiting the coaching team and securing sponsors; this project added another feather to Eisha’s cap as a female working in football.

Having traded Cryptocurrency for three years, Eisha’s fascination with NFTs over the past year has seen her build a humble portfolio. More recently, Eisha created her own NFT Collection (https://www.gizmorebels.io/). Eisha used this personal project as the perfect opportunity to further her interest with the Solana NFT ecosystem and get hands-on experience developing an NFT brand from scratch. Marketing the collection involved forming partnerships with celebrities and Crypto influencers for promotional reasons. Eisha’s efforts resulted in the following collaborations and subsequent creation of custom NFTs: John Terry, Allan Saint-Maximin, Nora Fatehi, Shreyas Iyer, Arnold Poernomo (Masterchef), Saint Eclectic, Knoxtrades.sol and Big Brain Holdings.

Following an exceptional year covering some of the world’s most prestigious sports tournaments and stories, Eisha’s contributions were recognised by the 2021 Asian Sports List as a Winner in Media (supported by Sky Sports). 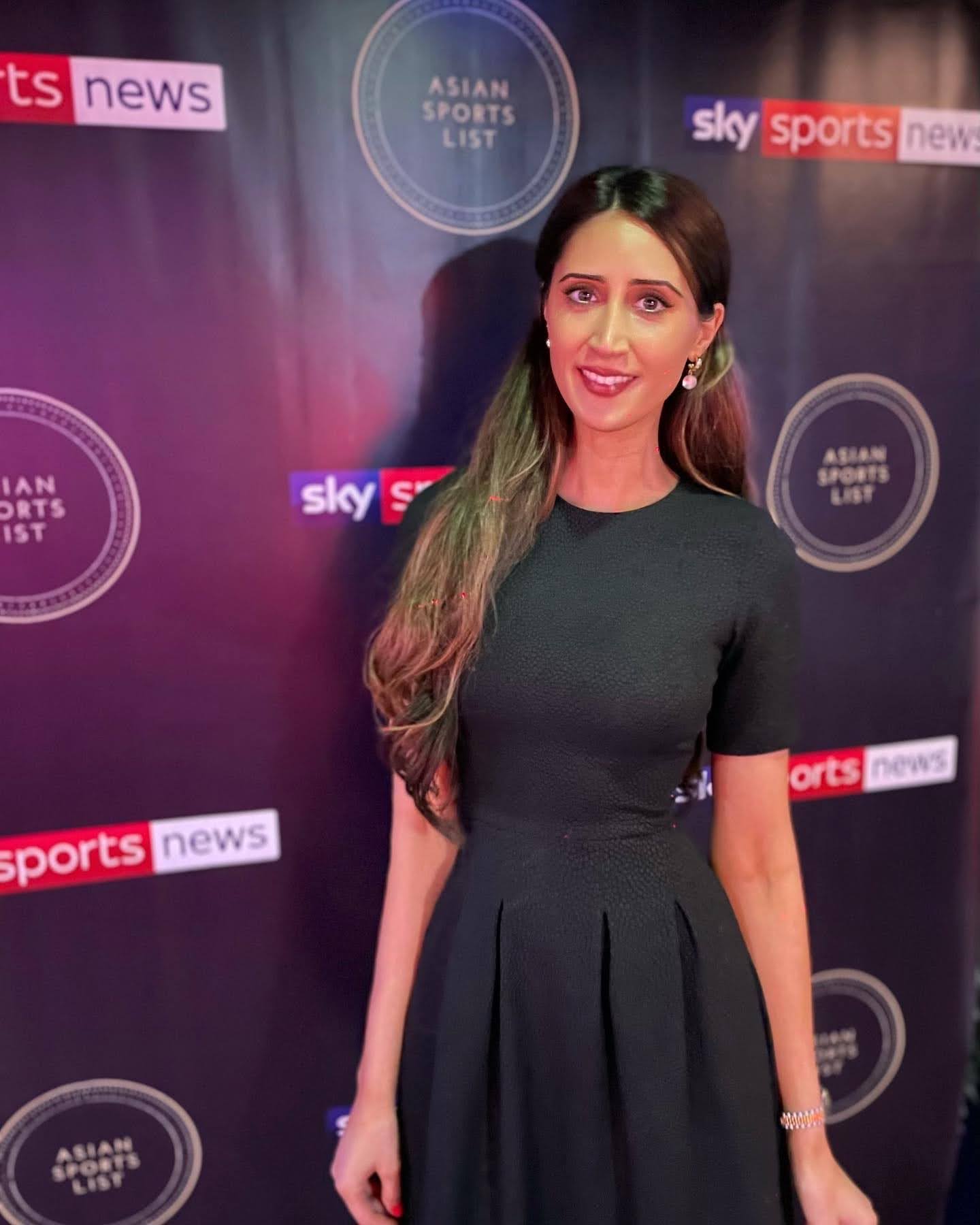 Eisha’s passion for sport stems from an active childhood as an avid swimmer, gymnast, Irish dance champion and cross country athlete. Being a former gymnast, Eisha has enjoyed exploring her interest in yoga over the past few years too. As an animal-loving vegan, Eisha is at her happiest out in the fresh air on a dog walk exploring the countryside.